It may happen to you to have to stay in King Salmon, Alaska, especially if you plan bears watching in the famous Brooks Falls in Katmai National Park. And it might happen to you whether you want it or not. As Alaska is unpredictable! King Salmon is a deserted place in remote Alaska, and the main building there is an airport. People are coming here for fishing or on their way to Katmai National Park. If it happens to you, just read below how to kill your time in King Salmon.

How to plan a trip to Katmai National Park?
What are the best things to do in Katmai?

– How are you? – local guy drinking something in an almost empty Sockeye Saloon, King Salmon asked Chris.
– Good! And how are you? – answered Chris.
– Great! What do you plan to drink? They don’t have draft beers… I recommend the Moscow Mule! It’s delicious and strong!

We were wondering how to fill our evening in King Salmon, Alaska. The airline canceled the return flight, and we were stuck for another night in small King Salmon. The village consisted of an airport, two inns, one bar and saloon, and a couple of grocery stores. Everything else was not relevant to us at the time. We stayed for the second time in one of the cabins of the expensive Antlers Inn, just a minute’s walk from Sockeye Saloon (according to google maps, it is 37 minutes from the airport, in reality, it was only 5 minutes everywhere!).

The cabins were rather poky but good enough for one night. But… Actually, it was our second night here. Our original flight here a couple of days ago was also canceled, so we were stuck in this place for the second time. If you spend two nights in such a small village (only 374 people live here as of 2010), you feel to know everyone and know everything about the place. This is how we felt, like a local.

It all happened during our dream trip to bear viewing in Alaska. Visiting Katmai National Park and Preserve is one of the best places to admire bears in their natural habitats in Alaska. The fastest way to get to this park is from King Salmon.
Was it the fastest … taking into account our lousy luck with canceled flights, it was not so fast. But the weather in Alaska is unpredictable. And its sudden weather breakdowns cause flights to simply be canceled. Sometimes more often, sometimes less often. Apparently, we were not lucky this time because it was already the second time within a few days.

Plan a bear-watching trip to Katmai National Park? Check out our detailed guide with lots of tips!

So Chris joined Rick and ordered Moscow Mule served by Sarah, and we started to talk. Agnes, as usual, was drinking the cheapest and the only red wine one could buy in this deserted place and was taking pictures to kill time. To Chris’ surprise, the drink was perfect! He started to talk with Rick, who was working here during the season as a logistic guy, earning very good money and spending almost all of them in the local bars for alcohol and weed – it is legal in Alaska. It is just nothing else to do here.

Check our photos and tips from bear viewing in Katmai National Park!

How it happened that we were stuck in King Salmon, Alaska?

Oh yeah, we owe you the explanation of how we ended up the second night in King Salmon. The original plan was to get to Katmai National Park for the best bear viewing in Alaska. The place is famous for bears in Brooks Falls hunting salmon.

How to get to Katmai National Park?

The easiest way to get to this park is through King Salmon. You have a couple of options to get to Katmai National Park from Anchorage.

TRIP TIP: If you plan to get to Katmai, check out our detailed Guide to Visiting Katmai National Park. We share tips, photos, and current prices. It will help you prepare for this adventure!

King Salmon is government transportation, service, and shipment center for the commercial red salmon and sport fishing industries. The Air Force base was closed in 1993 and keeps caretaker status, and due to this fact, King Salmon Airport is now a public access airport. For us, King Salmon was just a getaway to Katmai National Park!

Where to sleep in King Salmon, Alaska?

So what do you usually do if stuck in such a place? First of all, you arrange a place to sleep. We had a tent, but there was nowhere to put it up. So we had to book a night in Antlers Inn – our first night was 165 USD, but the second was cheaper (winter season just started on Aug 31st) – only 139 USD! The owner was really kind to us, maybe because she was flying with us to King Salmon on this fatal rescheduled flight. And it was the price for a cabin, not a room in the Inn! Of course, we had hot water and a bed, but that’s it! Poky, we said…

The Evening in King Salmon

The evening was progressing quickly toward the dark night. We finished the Moscow Mule. Paul – the local guy – joined us at the bar. Our dialogue was going pretty lovely, so Rick decided to buy us a drink – a strange local shot. Chris welcomed this idea really well, and Sarah served them. Rick was surprised how Chris swallowed the drink, and then he realized we are Polish guys, so drinks are our regular diet.

Rick and Paul decided to get a break because it was late, but we agreed to meet later for a pizza in Eddies (it got dark in the meantime, and the guys had to go for something stronger). We moved to Eddies and ordered the only pizza in town! Just frozen pizza prepared in the oven on your eyes. Once is a lifetime experience. Chris ordered a rum shot and Agnes another glass of awful red wine, again the only one available.

When it got completely dark in the village, Rick and Paul joined us back in the Eddies. This time we decided to buy them a shot…. thanks to the Revolut card – we have it, and only it worked in this place! (You should have one for such a trip – just use this link to order yours)

The night was long, so the next day was tough. We woke up with a light hangover and needed a morning coffee. The cabins had coffee machines, so it was on the right side. We quickly packed up and took 5 minutes to walk to the airport. Fortunately, we caught our windy and bumpy flight back to Anchorage.

Before You Go to King Salmon – Practical Information

If you don’t have time to get stuck two nights in King Salmon on your Alaska road trip – consider one of the organized tours in Alaska with wildlife watching.

Check our Alaska Packing List before your trip to Alaska!

You can get to King Salmon two ways:

There are no roads here.

The town has two Inns – Antlers Inn and Eddie’s Fireplace Inn. You can also find some Airbnb options. But they are far from the center. All are relatively expensive and targeted for more extended stays. There is no campground in the town, so make sure to have a place to sleep. Otherwise, you can try to survive too late at night in one of the bars.

There are two main places to eat and drink and a couple of grocery stores. One place is Sockeye Saloon (less famous), and the second Eddies’s Fireplace Inn.

Other services in King Salmon Alaska

There is a gas station, post office, bank, car rental, and ATM in the town, as well as a taxi service. Mobile phone coverage is limited, and only Verizon phones were working. Wifi is available only in the Antlers Inn for guests or as a separately paid service. 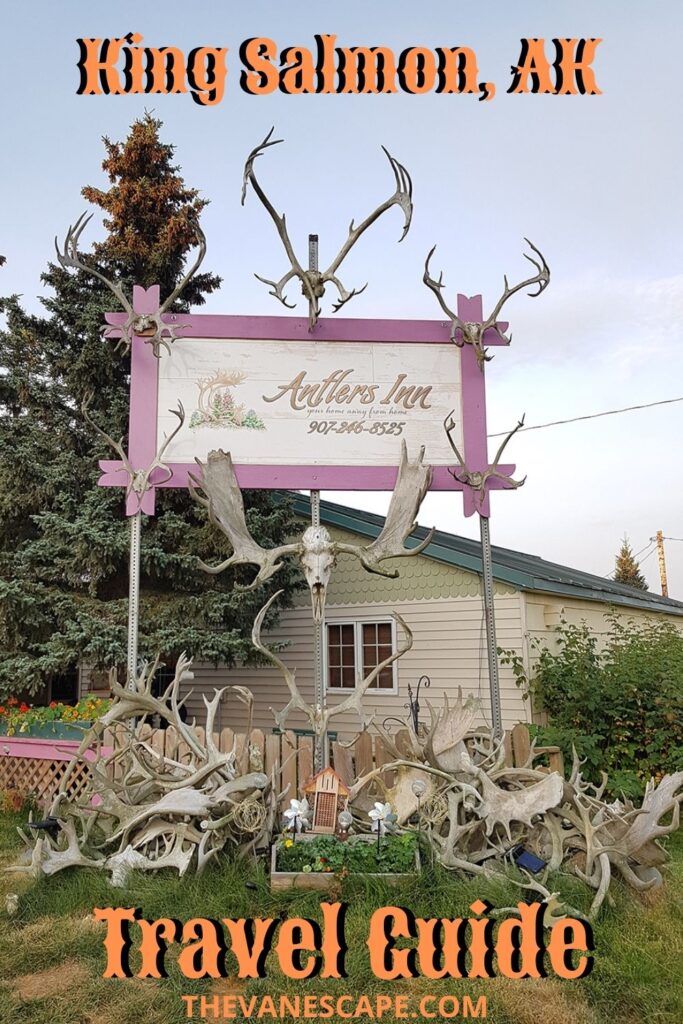